The UEFA Champions League first saw life in 1992 as it came along to replace the outdated European Cup. It was a time when the landscape of Europe was changing politically and with more countries on the map, the original competition needed to be expanded.

Now, more than 25 years later, the tournament is the pinnacle of European club football and naturally, it’s a big draw for the bookmakers too with millions being staked on champions league betting markets. Here, then, is our guide to the tournament along with some advice on what to look for when making a bet.

The Beginning of Champions League 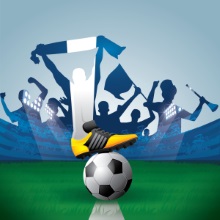 If you’re betting on champions league matches or on the tournament as a whole then it helps to know a little bit more about the history and the format of this great competition. The original European Cup first took place in 1955 and to qualify for this tournament, teams had to have won their domestic league in the previous season. In addition, the previous year’s winners of the cup took their place but this was a much smaller event than the one we are used to today.

The format was very different too with sides playing each other on a knockout basis over two legs before reaching a one-off final on neutral ground. In the late 1980s and early 1990s, the geography was changing, walls were literally falling and the old European Cup became outdated.

Punters first got involved in champions league betting at the start of the 1992/93 season when Marseille went on to win the trophy. The 1990’s saw the competition grow in terms of the number of teams involved and the new format, involving group games ahead of the knockout stages proved to be popular with both the viewing public and the betting community.

Through the Nineties, the tournament was shared around with no team winning the UCL twice until Real Madrid secured their second trophy at the end of the 1999/2000 campaign. Real are now the most successful side in the history of this tournament and are always among the favorites in the champions league betting odds markets at the start of the season.

In the 2018/19 edition of this competition, 32 teams appear from around Europe and they are initially split into eight groups of four. Each side plays each other home and away and at the end of that cycle, the top two clubs progress to the knockouts while the bottom two are eliminated.

That leaves us with 16 teams in the knockout phase and from the round of 16 through to the semi-final, they play each other over two legs, home and away, to determine the winner. All of this builds up to the one-off final which is held on neutral ground at the climax of a long season.

That format provides a huge choice of games and plenty of champions league betting to get involved with so let’s move on now and look at the market options.

How to Start Your UCL Betting Journey

Now you know all about the history and format of this tournament, you may now be wondering how to bet on the champions league. Your football betting options are similar to most major tournaments, but because this is a very busy competition for the bookmakers, things get very competitive, and there are lots of offers and promotions that we can take advantage of.

All of this starts with the outright tournament champions league betting odds where your task is to pick a winner from the 32 teams taking part. The market will open very early, almost as soon as the previous competition comes to a close and while it can be risky betting that far ahead, there are some higher odds to be found at the same time.

Others who like betting on champions league outright markets might look to switch to the top goalscorer option where, as the name suggests, you are looking to stake on the player who you think will score the most goals across the entire UCL campaign.

It’s a great competition with some of the best striking talent in the world on show, so this is a very exciting and competitive champions league betting market. Those are the outright options taken care of but what about all of those UCL matches across the course of a season?

Right from the very start of the tournament, the champions league serves up some thrilling games, but you don’t need to concentrate on Real Madrid, Barcelona, Bayern Munich and other top teams. Sometimes the value can be found elsewhere, and with 16 games in store across two nights during the group stages, there is plenty to choose from.

The most popular bet and a perfect place for newbies who want to know how to bet on the champions league is with the straight result betting. Like any football match, it’s just a case of picking between a win for either side or the draw and to help you make a correct call, you will need to do plenty of research in regard to form and don’t forget to check to see if there is a history of head to head results between the two teams.

This is the perfect way with which to start betting on champions league matches but the journey certainly doesn’t stop there, and in fact, we’ve only just begun when it comes to listing available bets.

A Little Something on the Side?

Side bets or, as they are known in some parts of the world, prop bets, are an interesting extension to any football match and it’s no exception when it comes to champions league betting. A side bet can involve any market where the punt doesn’t directly affect the result of the match, so we’re talking about total goals, winning margin and many more.

Perhaps the most popular of these side bets relate to individual goal scorers where the bettor has to decide who is going to find the back of the net and when. This starts with first goalscorer, and in the modern day, it’s been extended to cover last scorer, anytime scorer and, at a time when live betting has become increasingly popular, next scorer.

The task here is to consider the players taking part in the match in question and deciding who is going to find the back of the net. If you want to be brave you can take the higher odds for betting on corners or the first goalscorer or, you can play it a little safer by backing that player to score at any point in 90 minutes.

Research here is important if you’re betting on champions league matches in the goalscorer markets so once again, you need to consider the players that are in form and if there are any cases of head-to-head stats that show that a player has a particularly good record against a certain team.

Proper preparation is the key to success with champions league betting and you will be better armed and have a better chance of landing winning bets once you’ve done it.

Rounding up Those Side Bets

For a big match in the UCL there could well be over one hundred champions league betting odds markets away from the ones that we have already mentioned. Goals are always a big focus, and you can expect to see Total Goals, Both Teams to Score and others based on players finding the back of the net.

In high-pressure games such as these, discipline could be an issue so we may see markets open on how many yellow cards are issued and whether we will see a sending off. Check with your bookmakers when you’re betting on champions league games to see exactly what is available.

Tips on Maximising Your Betting Value

We mentioned that bookmakers can get very competitive when it comes to providing odds and offers for the champions league but what types of promotions can you find from around the sportsbooks? Amongst the most common deals are the price boosts: These will take champions league betting odds for a specific game and give them a lift by a few points just to keep punters interested and to give them potential for some higher profits. These could be for new customers where some very big increases can be found or for existing account holders where the lifts would be smaller. The boosts will usually apply to the straight result betting but they can also be found for first goalscorer and more. While these may be the most popular offers, look out too for accumulator insurances and boosts, ‘bore draw refunds’ free bet deals and many more.

Now you know how to bet on the champions league while at the same time expanding that knowledge to find as much value as you possibly can from the tournament. It’s one of the success stories of modern football, and this information should hopefully allow you to make some nice profits from your own champions league betting strategy.